You are here: Home » Facts for kids » What are Mayflies 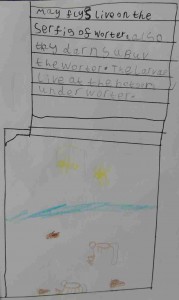 Mayflies are group of insects belonging to the order Ephemeroptera. The name came from the Greek words “ephemeros” which means “short-lived” and “pteron” which means “winged”. They are not “true” flies. Rather, they are related to Palaeopterans which include dragonflies and damselflies. There are about 2,500 known species worldwide. The most common of which is the Hexagenia bilineata. Mayflies are best known for having a life span of not more than two days.

Mayflies are characterised by delicate, soft bodies with bristle-like antennae. Adults have wings that, when at rest, are placed vertically. The hind wings are usually smaller than the forewings. Their larvae, called nymphs, have flat, elongated bodies. Their distinct features are the seven pairs of tracheal gills on the dorsal part of the abdomen. Attached to the back of the abdomen are 2-3 long cerci (tails), depending on the species. Nymphs normally moult 20 to 30 times.

What do Mayflies eat?

Adult mayflies do not feed and have non-functional mouthparts as there is not much point when you only live for a day or two.  Nymphs (also known as naiads) are plant detritus. They feed on decaying plant leaves, grasses, algae, and other organic debris that have accumulated on rocks and soil near rivers and streams.

Where do Mayflies live?

Mayflies are a highly valued group of insects. They constitute a big part in the freshwater ecosystems throughout the world. They commonly thrive in rivers and streams where their nymphs seek habitat. In particular, clean, flowing, and highly oxygenated waters are good for their health and survival. However, some species already developed tolerance to environments with limited oxygen such as in ponds and lakes where water is static.

Mayflies are used by scientists as tools for monitoring water conditions. Their populations are indicators of the health of certain aquatic habitats.

Watch the stunning Life in the Undergrowth, a BBC nature documentary series written and presented by my hero David Attenborough