You are here: Home » Facts for kids » Bee Facts For Kids 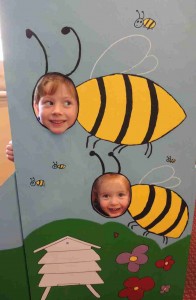 What are honey bees?

Honey bees are insects grouped under the genus Apis. They comprise a small fraction of the estimated 20,000 known species of bees. They are believed to have originated from Southeast Asia, particularly in the Philippines. One species, Apis mellifera, is native to that region.

Honey bees are best known for producing sticky, sweet-tasting honey. Although some species produce honey, only the members of genus Apis are true honey bees.

Honey bees have 6 legs, 2 pairs of wings, a nectar pouch, a stomach, 2 compound eyes made up of thousands of tiny lenses (with one eye on each side of the head) and another 3 eyes on top of the head.

There are three types of honey bees. The “workers” are the ones you most often encounter. These are female bees that do all the hard work from gathering food, building, maintaining and guarding the beehive, up to providing good circulation of air by flapping their wings. They perform all other functions necessary for the population to live. The “Queen” has the simplest job: to lay eggs that will serve as the next generation of bees. Only one queen exists in a beehive and if she dies, the workers will create a new queen. They will choose one worker to be fed with a special diet called “royal jelly”. The last type of bees is the “Drones” – the only boy bees.  Their job is simply to fertilize the Queen’s eggs to produce more workers.  They don’t make honey, and they can’t sting either, but they can help out around the hive with other jobs.

What do bees eat?

Honey bees feed on nectar and pollens of flowers. The larvae (young ones) are fed with royal jelly first before they are given pollens or nectar. The workers serve as their “babysitters”. During winter, they use honey stores to feed themselves.

Where do bees live?

Most species are commonly found in tropical countries, thus they are widespread in Asia. But honey bees also thrive in temperate climates, only they have to make bigger hives for storage of honey and protection during winter.

Honey bees build beehives as their homes. They build in areas with plentiful flowers nearby (8 miles or closer) so source of food is within reach. Meanwhile, honeycombs are usually found in hollow, unoccupied logs and other enclosed areas.

Find a bee in the garden. Observe a worker bee’s journey collecting nectar from the flowers, look for the pollen sacks on the hind legs why do you think the colour is yellow?  Be careful not to frighten the bees – don’t get stung!