You are here: Home » News » When is a plague not a plague?

When is a plague not a plague? 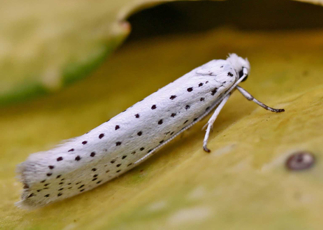 so why do you suppose it’s called “ermine” then…? photo:entomart

A street in south London has apparently been “invaded” by a “plague” of Bird-cherry Ermine Moth caterpillars Yponomeuta evonymella. The good people of Warfield Road have been complaining in the pages of the Evening Standard that their trees (presumably Bird-cherries Prunus padus) are being damaged and that “it’s just not on.” Quite why they need to use such apocalyptic and/or peevish language is beyond us. (Henry says: they sound very cross but there’s nothing they can do about it until the moths hatch, is there? Catherine adds: moths are pretty – can I have an ice-cream please, Daddy?)

These attractive, speckled lepidoptera colonise Bird-cherry trees, which we guess have been planted along the street. So it’s really a case of “introduced moth species does what comes naturally in introduced host tree species“.  It’s all part of a natural cycle and it’s not the Bird-cherry Ermine’s fault, nor the transplanted Bird-cherries’ fault, if they find themselves gracing the leafy streets of Surrey.

True, the caterpillars do tend to occur in large numbers, and they spin huge communal nests, turning trees into huge candy floss sticks.  But then they can’t exactly be spoilt for choice in terms of available host trees. Enough of them together can indeed strip a tree of foliage but the trees usually survive and often recover within the season, certainly by next season. Anyway, if you think about it, it’s never in a species’ interest to exterminate its host population entirely.  And it’ll all be over in a few weeks so we think Warfield Road should count its blessings and look forward to the flitter-flutter of tiny Yponomeuta wings.  Otherwise, if they carry on with their starchy attitude, they could end up attracting an infestation of Flour Moths!  Ephestia kuehniella would really give them something to gripe about!