There was a really interesting programme on the radio today that Henry listened to on the internet via this link http://www.bbc.co.uk/iplayer/episode/b01n651r/Saving_Species_Series_3_Episode_6/

Apparently there’s a new species of bush-cricket in the UK.  It’s called the Southern Oak Bush-Cricket and it looks like this (photo by Fritz Geller-Grimm – nice one, Fritz!) 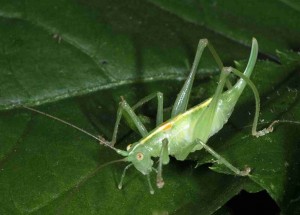 It’s a lovely green colour, with bright yellow eyes and a yellow stripe down its back – Catherine says it looks sweet.  What makes it different from the common oak bush-cricket is that it doesn’t have proper wings – those orange dots on its back are all it has instead.

It’s not actually all that new – it’s been here for about 10 years (which is longer than either Henry or Catherine) but it’s only recently started to spread out of London.  If you see one, the scientists at the Open University will be really interested to hear from you.  So will we!  You can let everyone know at www.ispot.org.uk.

According to the encyclopedia, it’s arboreal (Henry looked this up and it means “lives in trees”), nocturnal (“comes out at night”) and carnivorous (“eats animals”). In fact, it likes to eat the caterpillars of the horsechestnut leaf miner moth which Henry says is a good idea because those caterpillars eat conker trees so more crickets means more conkers!

Another really good fact about this bush-cricket is that it doesn’t sing like most bush-crickets and grasshoppers.  Instead it stamps its feet on leaves and makes a tiny tiny drumming sound, too quiet for people to hear.  Other crickets can hear this and so they all know where each other are.

Bush-crickets are also called katydids.  They look like grasshoppers but they’re more like real crickets.  Henry and Catherines’s Dad said he thought bush-cricket was a game they play in Australia, and he kept saying it so their Mum had to tell him to be quiet.