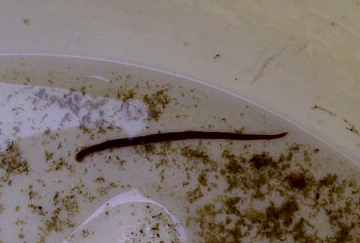 Now, there’s a phrase you don’t read every day.

Henry and his Dad were cleaning out the pond pump and found a couple of freshwater leeches inside the filter.  It’s hard to know quite what they are (even leech experts have trouble telling species apart) but we’ve finally settled on Dina lineata as being a likely candidate.   They don’t seem to have a common name, so we’ve decided to christen them Henry’s Pond Leech or HPLs for short.  Let’s hope it catches on!

Leeches have a bad reputation, but they’re not all bloodsuckers.  HPLs, for instance, eat small invertebrate larvae and worms and swallow them whole.  They play a vital role maintaining the natural balance of species in the pond and they’re absolutely fascinating.  They’re also superanimals: they’ve got 32 brains, 18 testes (Henry says those are their boy bits. They’ve also got girl bits which Henry says makes them “hermaphrodites”.  Catherine says: what?), and up to 16 eyes. Not bad for such a humble creature!

They stick to a surface with the sucker at the back end, and then look around for somewhere to stick their front sucker (the one with the teeth!)  Then they might stick to another surface and “loop” across in the classic leech way, or they may find a juicy meal and start munching.  Often they move by wriggling like a worm, or even by swimming like an eel.