You are here: Home » News » Of Cabbages and Things…

Of Cabbages and Things…

“Large White” can refer to a type of cabbage (yum!), butterfly (aah!) or even pig (Catherine says: pig! pig! oink!).  What do they have in common, besides the name? Well, for a start, both the pig and the butterfly will eat the cabbage, given half a chance.  (This is starting to sound a bit like that old puzzle where you have to work out how to row across a river when there’s only room to carry 2 items with you at a time.*)

We are, of course, more interested in the butterfly and we had a close encounter with one today.  Ours was a Large White Pieris brassicae, also known as a Cabbage White (which is reflected in the Latin name) and we saved her from a hot, enclosed, glazed foyer of a DIY store.  That means we’ve probably got a few gardeners and allotmenteers cursing us for releasing vermin, rather than cheering us for saving a damsel in distress!  Large Whites lay their eggs on cabbages and other brassicas, and the caterpillars really, really like eating up their greens – but they’ll also go for nasturtiums so it’s always worth planting a few of those too! 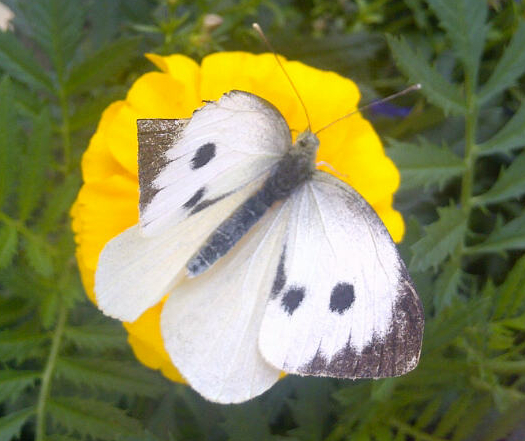 It’s been funny weather for us all this year: a long, cold start, then a blast of heat for a couple of weeks, and now thundery showers.  And it’s been even tougher if you’re a butterfly.  We found this beauty in full sun and, by the afternoon, she** was definitely getting hot.  We don’t know how long our friend had been there, or what kind of year she’s been having, but she seemed quite exhausted after all that flapping against the window.  She didn’t put up anything of a struggle when we tried to catch her – she just walked onto a proffered thumb and sat there.  We dropped her off on a nearby plant pot – as you can see she was very grateful and got stuck straight in to a juicy marigold.  It’s tiring work trying and failing to fly through glass!  If you look closely at the photo, you can see her proboscis sticking down into the flower in search of nectar.  (Henry says her “proboscis” is sort of like her nose – it’s the tube a butterfly drinks through, a bit like an elephant does with its trunk).

Large Whites’ wings are white on top, pale green underneath, with black tips on the forewings.  In addition, females also have two black spots on their forewings (**in case you’re wondering how we can be so confident she was a she).  They differ only slightly from their cousins, the Small Whites Pieris rapae, and are reasonably similar in appearance to other less common Pieris species (less common in the UK, that is).  Large Whites are fairly common as UK butterflies go but, like all lepidoptera, they’re in decline and so we feel we did our good turn for the day in rescuing this one. 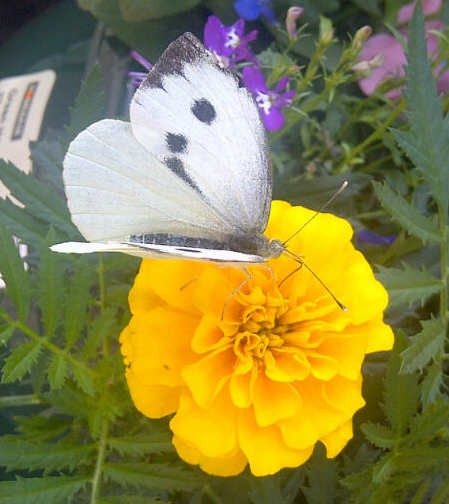 [*The correct answer to the puzzle is probably to roast the pig, serve it up with the cabbage, and then row yourself across the river after a hearty supper.  The butterfly can fly across on its own.]