You are here: Home » News » Not all Little Brown Jobs…

Not all Little Brown Jobs…

…but not all glamour queens either 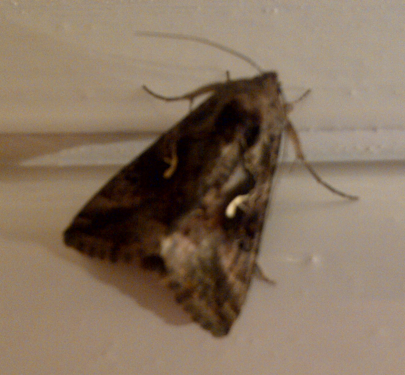 Just like birdwatchers have their “LBJs” (“Little Brown Jobs” which are hard to identify and frankly not worth the effort), we “mothers” have species like the humble Cabbage Moth Mamestra brassica.  Although specimens vary considerably in size, this common moth is consistent in appearance: grey hindwings; brown, mottled forewings only relieved by a prominent white “stigma” and a broken white line along the wingbase.  In other words, drab and boring.  And perhaps a bit dull too.

Adults can be seen flying at night between May and October and are attracted to light.  This example flew into our kitchen the other evening.  It wasn’t terribly exciting.

But what’s this?  What a stunner!  What a poorly focused photograph! (sorry, it was the best we could do under the circumstances) But, still, what a lepidopterous revelation! 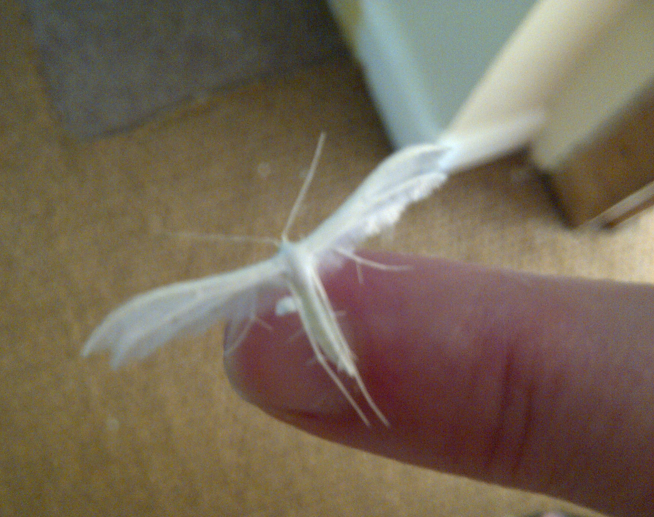 It’s a White Plume Moth Pterophorus pentadactyla and we spotted its distinctive feathery wings and glamourous white colouration in our dining room.  The caterpillars particularly love bindweeds such as field bindweed Convolvulus arvensis of which there is plenty in our garden. The adults’ resting posture (wings rolled up and stretched out in a crucifix position) means they can often be mistaken for a bit of dried grass.  It’s not an uncommon species, but we’d never seen one before.  Henry wanted to know if it was a pterodactyl.  Catherine thought it was a small bird.  Well, now we know.

PS – did you know the technical term for a moth-spotter is a “mother”?