You are here: Home » Facts for kids » Head Lice 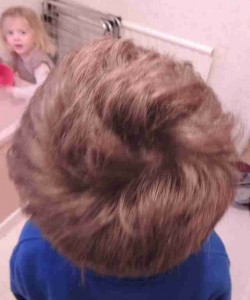 The head louse (Pediculus humanus capitis) is parasite only of humans. Head lice are small (1–3 mm long) wingless insects spending their entire life on the scalp and feed only on human blood. The term nit refers to either a louse egg or a louse nymph. Newly hatched nymphs will moult three times before reaching maturity.

Head lice are different from other parasites such as fleas as the head louce will spend its entire life cycle on a human host. Head lice can’t fly, their short stumpy legs make it impossible for them to jump or even walk on a flat surface. However these lice are very mobile and can climb up strands of hair extremely quickly. Although any part of the scalp can be colonised, head lice prefer the nape (back) of the neck and behind the ears for laying their eggs. Head lice don’t like light and will move towards shadows or dark-coloured objects in their area.

In most cases, itching is the main symptom of head lice. It is not caused by the lice crawling on the scalp but by an allergy to the lice faces, moulting or bites. However, you can still have head lice and not have itching.

Except for rare secondary infections from the scratching at bites, head lice are essentially harmless, and have been regarded by some as a cosmetic rather than a medical problem. Unlike body lice, head lice are not disease carriers, and it has even been suggested that head lice infections are beneficial in helping to foster a natural immune response against lice which helps humans in defence against a more dangerous body louse, which may carry a number of hazardous diseases.

Like most insects, head lice lay eggs and each egg has a single embryo. Egg-laying is temperature dependent. In cool climates such as the UK, eggs are generally laid within 1 cm of the scalp surface, in warm climates, and especially the tropics, eggs may be laid 15 cm or more down the scalp.

Each oval shaped egg is about 0.8 mm in length, are attached with quick hardening glue. The eggs are tan-coloured as long as they contain an embryo but appear white after hatching in six to nine days depending on conditions and temperature. The white empty egg case can remain on the hair until physically removed or until it slowly disintegrates, which may take months. Females’ lay about three to four eggs every day or 50–150 eggs during its lifespan of four weeks. A generation lasts for about one month.

Head lice can live off the head, for example on soft furnishings such as pillow cases, on hairbrushes, or on coat hoods for up to 48 hours. Newly hatched lice will die within minutes of hatching without a blood meal.

Make sure you also read: