You are here: Home » News » As pretty as an oil painting

As pretty as an oil painting

One of the Famous Five

Our friend Di took this lovely shot of a Black Oil Beetle Meloe proscarabaeus in her garden.  Not only is she lucky enough to have such a distinguished visitor, her photo also won third prize in the village summer show!  She correctly identified it as an Oil Beetle (family Meloidae, also known as Blister Beetles) and it looked to us like it could be either a Black Oil Beetle or a Violet Oil Beetle Meloe violaceus. 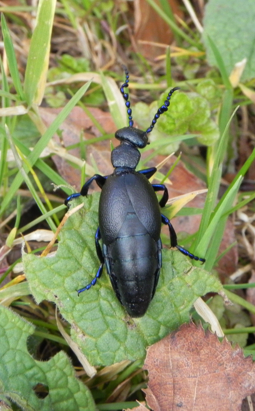 We can’t understand how this didn’t win 1st prize!

It can be rather difficult to tell the difference between these two, which are the commonest of the five UK species of oil beetle.  (You may remember towards the end of 2012 that we reported the rediscovery of the 5th species, the Mediterranean Oil Beetle Meloe mediterraneus.)  Well, Di’s friend certainly isn’t a Medi – they’re much tubbier, with slenderer antennae.  Nor does it look like a Rugged Meloe rugosus (they’re much rougher to look at) nor a Shortnecked Meloe brevicollis (guess their distinguishing feature!)

The trouble is, Violets and Blacks aren’t always the colour you’d expect, and they vary considerably in size as well.  But if you look at the base of the thorax (Henry says that’s the middle body part, between the head part and the tail part, which is really called the “abdomen“), you’ll see it’s got a pretty much straight edge and a small tooth-like projection.  This marks it out as a Black – a Violet would have a curved lower edge and a much larger “tooth”.  Thanks to John Walters for clues on telling them apart!

We also know it’s a boy because  of its splendid kinked antennae – male Blacks and Violets both have antennae like this, while their girlfriends are more regularly proportioned.  (Catherine says: I’m a girl but I don’t have antennas.) No, Catherine, you don’t. But you are as pretty as a painting nevertheless.