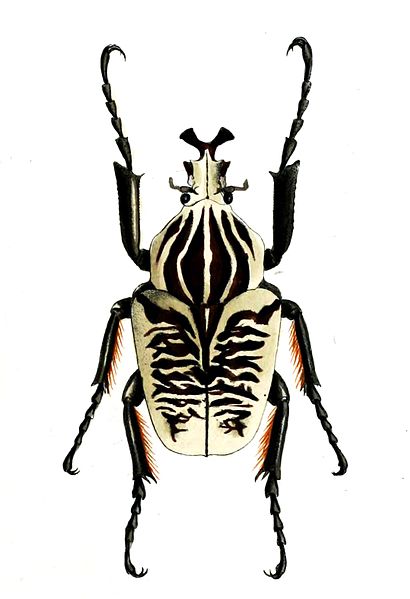 Our favourite time of the week – Dom’s Wild Things on Channel 5!  We’re all lined up on the sofa, ready to go.

This week our intrepid hero is looking for a Goliathus or Goliath beetle.  These are some of the largest beetles in the world (it depends very much on whether you’re counting length, width, weight or whatever).  They are also some of the rarest, not least because they are so sought after by collectors – BOO HISS!! SHAME!! An adult beetle can reach 2.5-4.5″ with males being slightly larger than females.   As well as their remarkable size, Goliath beetles are notable for their dramatic markings of contrasting black-and-white stripes.  Goliathus adults feed primarily on sugary tree sap and fruit whereas the larvae need more protein-rich foods. Captive specimens have been successfully raised on tinned dog food!

Dom goes to Cameroon and has to resort to contacts in the semi-legal insect trade for a lead.  Aparently, some species of Goliath are “relatively” common, but the Giant White Goliath is vanishingly rare and critically endangered (despite being apparently under the protection of the local volcano god and mountain spirits).  A prime specimen can fetch £400 or more – which doesn’t strike us as very much for such a beautiful and unusual animal.  It would be so much nicer if these lovely creatures could be left in peace to get on with their day – but as Dominic himself mentioned, the locals are only trying to feed their families.  It’s the collectors with the cold, hard dollars who need to be held to account.