The winter months are usually pretty quiet times for bugs, so we’re delighted to have not just some news about beetles, but some good news: the Mediterranean Oil Beetle (Meloe mediterraneus) has been found alive and well in Devon.  It was last seen in the UK in 1906, in Kent and Essex and since then it was thought to have become locally extinct. 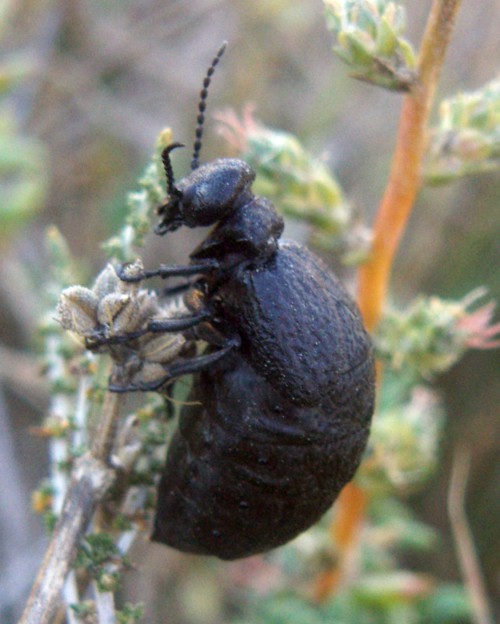 thanks to Bárbol for this lovely shot of a Spanish mediterranean oil beetle, beetling about

Buglife scientists (www.buglife.org.uk) looking into beetle populations near Salcombe in south Devon spotted something which they thought was the related Rugged Oil Beetle (Meloe rugosus).  That was exciting enough – Ruggeds are also very rare but, on further examination, they noticed the beetles were too big to be Ruggeds and their larvae were the wrong colour.   A bit more research revealed these were in fact the long-lost Medi’s!  Whether they’ve been hiding there all along or have reintroduced themselves from the Continent isn’t clear. But the good news is they’re back!  Well, good news unless you’re a solitary mining bee…

Medi larvae spend some of their time living in solitary mining bee burrows. To get there. they wait inside flowers for a mining bee to visit.  Then they crawl onto the bee’s back, hang on with their special claws and hitch a lift home to the bee’s burrow. Once there, they turn into a different, less mobile sort of larva and start eating the store of pollen and nectar the bee has left for her own larvae, as well as eating the bee’s eggs themselves!  The Medi’s moult several more times before pupating and overwintering in the burrow.  In the spring they emerge as adult beetles.  Which is a bit tough for the bees, but the fact that these beetles are busy scampering around the cliffs of Devon means there are plenty of mining bees around and all that means the local ecosystem is actually in fairly good shape.  Every cloud has a silver lining.

Oil beetles are striking creatures – they’re quite large for beetles (about 2cm or 1″ long) and have bright colours and definite segmentation, depending on species.  Henry says: segmentation means “being divided into segments” and explains that all insects have 3 body segments: a head, which is connected by their neck to their thorax (upper body), which is connected by their waist to their abdomen (lower body).  Oil beetles are also called “blister beetles” because if they get frightened or startled they squeeze out a poisonous oil called “cantharidin” which can burn your skin, giving you a blister.  But if you handle them gently and don’t scare them, they’re friendly enough.

The “Fab Four” of UK oil beetles (Black, Violet, Rugged and Short-necked) now needs to be upgraded to the “Famous Five” so the Medi can take its place with its cousins.  For more information on oil beetles, as well as how to help take part in a survey, check out http://www.buglife.org.uk/getinvolved/surveys/Oil+Beetle+Hunt  Medi’s in particular are nocturnal (they come out at night) so they’re going to be hard to see, even if you’re looking for them.