You are here: Home » News » Rear of the Year

Rear of the Year

Not much happens in the Atherton Tablelands, a remote agricultural corner of Queensland mainly populated by dairy cows and horseflies.

But life in the Atherton has just got a whole lot more bootylicious with the official arrival of Scaptia beyonceae.  That’s right, a species of the Scaptia genus of horsefly named after none other than Mrs Carter herself – Beyoncé G. Knowles, GQ’s Sexiest Woman of the 21st Century and much more besides.  It’s a beauty – and a rarity too: only 3 specimens have been recorded to date, all of them female.  Henry’s Dad can’t work out whether that makes them Survivors or very Independent Women or maybe, as Heny’s Mum suggests, he should stop struggling for a clever pop reference and just get on with the article.

Although adult horseflies (including all members of the Tabanidae family, not just Scaptia ss) usually eat nectar, the females of most species also need blood in order to reproduce. Only the girls have biting mouth parts, and their bites are generally very painful.   While some species bite like mosquitos, piercing the skin with a needle-like proboscis, most have knife-like mandibles which they use to rip the skin open.  Catherine says: “Ow!” Horseflies are even more of a pest because they are extremely agile (and so very hard to swat, not that we condone that kind of behaviour!) and very persistent.

So, we’ve got a bloodsucking horsefly and a poptastic megastar – what’s the connection?  Well, one’s an annoying pest who’s impossible to get away from and constantly makes an irritating high-pitched buzz and, er, the other’s Beyoncé.  OK, but how come this modern-day divissima has an insect named after her? And what’s it doing in the whoop-whoop of Far North Queensland?

…which one would you rather be bitten by? 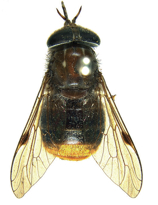 Check out this picture… No buts – just look at that butt! (No, not that one, that one!)

Scaptia beyonceae boasts a dense patch of golden hair on the tip of its abdomen, giving it a striking gold booty.  Even entomologists aren’t impervious to the charms of the female derriere and couldn’t resist the chance to name it after her.

Mind you, they took their time.  S. beyonceae was first noted in 1981 but not formally described until 2011.  If  the good folk at the Commonwealth Scientific and Industrial Research Organisation had got their skates on earlier, we might well be discussing S.minogueae.  Now THERE’S a backside…