You are here: Home » News » Lovely day for a swim water bug… 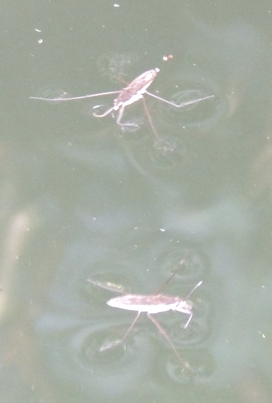 Henry and his Dad spent the afternoon watching the frogs in their pond.  These lovely amphibians (the common frog Rana temporaria) are, of course, vertebrates and so not really relevant on this blog.  But they eat invertebrates, so they kind of count.  And we also spotted at least one kind of aquatic insect or water bug which might be Froggy’s next meal: the pond skater Gerris remigis.

You often see these little bugs skimming around on the surface of ponds.  And they are indeed true bugs, being members of the order Hemiptera.  Their legs are covered with microscopic water-repellant hairs which allow them to stand and run on the surface tension of the water (hence their more irreverant nickname “the Jesus bug”).  They stand on their front and rear legs, and row themsleves along with kicks of their middle legs.  On a still surface, they can get up quite a speed – 1 metre per second or more.  They also use the surface as a kind of drum, beating out messages to each other such as “Here I am!”, “Go away!” or “Hello, gorgeous!”

There are over 1500 species of Gerridae, mostly living in fresh or stagnant water, but a few preferring estuarine or saltwater.  They feed on other insects which fall into the water, and are often seen sharing a meal (except durign the breeding season when things get a whole lot edgier and they may even turn on each other for a quick snack!)

Frogs and fish will both eat pond skaters if they run out of other options, but they apparently prefer not to (some species of pond skaters secrete a fish-repellant pong to deter any hungry opportunists!)  Instead, their main concern is birds and each other – in case of over-competition or predation, they will fly to another nearby body of water.