This is our choice of top bug songs – is your favourite here? 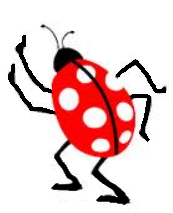 We’ve only picked serious(ish) pop songs, so no Old Women Swallowing Flies, or Incey Winceys. That would be too easy…

Sorry – a bad pun, but it’s really catchy and we couldn’t resist!

Henry says who? what? Henry’s Dad has a nostalgic look in his eyes…

We know it’s trendy to knock Bono these days, but this is a great song from a great album – the sound of that summer in Prague…

A brilliant and very underrated band.  This is the only song we know that namechecks the Death’s Head Hawkmoth!  They also do another song called Apologies to Insect Life – amen to that!

A ridiculously catchy Spanish folk song, about an eponymous cockroach with a limp.   It’s been covered by such heavyweight artists as Los Lobos, Gipsy Kings, Louis Armstrong, the Wiggles… The Wiggles? Well, they started life as “The Cockroaches” so it all fits beautifully.

5 Rimsky-Korsakov- Flight of the Bumble Bee

We had to include something classical.  We’re a cultured bunch here at insecthouse, dontcha know?

Everyone secretly loves a bit of Acca-Dacca.

Always makes us laugh – the daft bassline as well as the lyrics!

2 Jerry Garcia – There Ain’t No Bugs On Me

OK, it’s obscure and deeply unfashionable, but we’ve got a soft spot for ageing hippies (hi, Nana!) so we had to include this one.  The lyrics are great fun too.

1 Adam and the Ants – Antmusic

Did you really think we could choose anything else? All together, now: Antmus-iiiic! ah! ah! ah! ah!