You are here: Home » News » Crosses and diadems – more spiders!

We found a lovely specimen of an Araneus diadematus or European Garden Spider – unfortunately we found it in Henry’s bedroom so he wasn’t too pleased! We caught it in a glass and slid a card under it. This frightened it, so it curled its legs up and played dead. In fact it stayed like that, sulking, until we let it go in the garden. 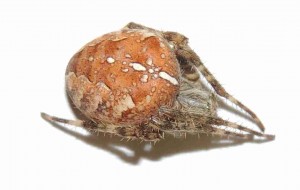 our European Garden Spider – still in “sulk mode” but what a beautiful cross!

This is one of the most common and best known British “orb weavers” – the kinds of spiders that spin the classic web-shaped webs. You often see the webs in bushes and woodland, especially when they catch the dew or on foggy mornings. The spiders themselves are usually found sitting at the centre, or a short distance away at the end of a “signal line” or “telegraph line”, waiting for the tell-tale vibrations of an insect caught in the silk

European Garden Spiders are easily identified by the distinctive white stripe or cross on their abdomen. This gives them their other names: diadem spider, cross spider, or cross orbweaver.

Henry says that’s all very interesting, but can we let it go now? Catherine was a bit scared, but her Mum said not to be – these spiders are harmless and you’d have to really go out of your way to make one bite you. Even then, the bite isn’t dangerous, just a bit unpleasant.