You are here: Home » News » what is the norovirus?

what is the norovirus? 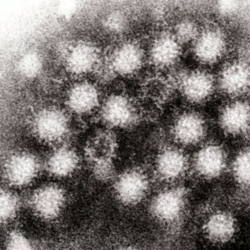 puke or the Norovirus? Actually it’s a photo of the virus.

it’s that time of year again

When Norovirus comes to town

It’s a pretty unpleasant experience; the unmistakable symptoms of Norovirus or ‘winter vomiting bug’ include feeling tired, aching limbs, tempretature and powerful vomiting but then like a bad dream it disappears as fast as it came.

It’s estimated between 600,000 and 1 million people in the UK catch norovirus every year. It’s the scourge of hospitals, cruiseships and schools everywhere. There is a norovirus outbreak in my village at least twice a year without fail. Idal playground chitchat is usually the first indicator of its arrival with so-and-so off sick with the vomiting bug reacts with groans and oh nos. We all know it’s just a matter of time before it comes our way. It spreads more easily in winter because people tend to spend more time indoors and near to each other but you can catch it any time of year.

It’s a tough customer, Norovirus can live for 12 hours on hard surfaces, and up to 12 days on contaminated fabrics it can even survive for months, even years in contaminated still water.

The norovirus incubation period is 12-48 hours, this is when you are infectious to other people and you can get norovirus just by being breathed on or the air from flushing an infected vomit-filled toilet. The virus is actually initially transmitted by food or water conamintated by poo. You can also get if by person-to-person contact, touching infected surfaces and from just breathing the air around you. Bummer.

Doctors really don’t really want you to visit them as the disease has no specific cure, you just have to let it run its course, but it should not take more than a couple of days for a full recovery. Severe sickness is rare, some people do die, but it’s mostly the very young, the elderly, and those with weakened immune systems in hospital.

I was cleaning up sick and changing Henry’s sheets (again) with a bug so highly contagious I was resigned that it was only a matter of time before I caught it myself. Oddly this year I didn’t. Similarry last year when I was doubled over with a dout of Norovirus I had Catherine practically climbing into my sick bowl desperate for my attention yet even when covered in my sick she managed not to catch it.

The virus can be killed by boiling or by chlorine-based disinfectants, but the virus is less vulnerable to alcohols and detergents. ..

Still it does pay to wash your hands.