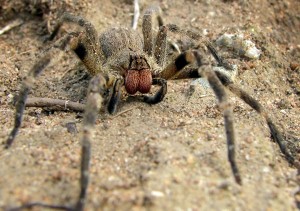 It’s Wild Things with Dominic Monaghan on Channel 5 again!  Even before he’s spotted a single army ant, he’s tackling a Brazilian Wandering Spider Phoneutria fera – the most venomous spider in the world whose deadly bite can cause fatal erections in men! Dom, we’re just in awe!

Anyway, army ants… Dom’s finally found an outlying column, advancing at 15m/h.  That’s a lot for little legs, but these guys are unstoppable – they’ll take on scorpions, tarantulas, paper wasps.  In fact absolutely anything that gets in their way will be killed, cut up and marched back to the “bivouac” or mobile nest.  These bivouacs are temporary army ant nests made up of… more army ants!  The workers and soldiers form a living shell around their sisters and, more importantly, their queen.  Quite apart from the enormous ball of ants hiding out under a rock overhang or in a hollow tree, these bivouacs can be spotted by the debris pile on the ground beneath them.  The debris is the grisly remains of the army’s victims – the hard, inedible bits of beetle carapace, scorpion exoskeleton etc.

As soon as the ants feel the need to move on, they strike camp and head out.  The main camp follows the “raid fronts” – columns of raiding scouts that scope out the terrain ahead and bring back booty and chemical reports of the territory the army is marching through.  The army analogy holds all the way. 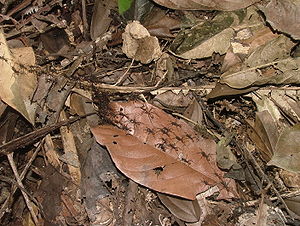 Although all species will sting and kill pretty much anything which crosses their path, only Old World species – Doryluset al – are generally capable of cutting up and eating larger animals such as small vertebrates.  The jaws of New World army ants (such as Eciton) are generally too small for such large prey – not that this makes much difference to how dangerous they are!   Dead but uneaten animals are left for follower species such as antbirds and other scavengers.

The sting of a single army ant is painful. Multiple stings can be debilitating and even fatal. Best not get too close or linger too long! Back away and leave the army to conquer the rain forest.