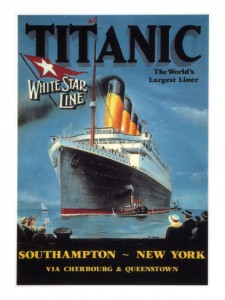 with a minibeast adventure.

One of Henrys passions is the Titanic so to make his 6th birthday a memorable occasion we took a trip to the Southampton Titanic Museum display at SeaCity. The permanent exhibition was great for youngsters and big kids alike. There were plenty of hands on displays with Daddy not so secretly enjoying trying out his CQD skills, Henry liked the touch screens and little Catherine ‘watching TV’ and listening to the telephones. As it’s the centenary of the Titanic’s sinking there was an addition display of Titanic paraphernalia produced over the decades (playing cards, teddy bears, teaspoons etc.). I was a little disappointed in this display of Titanic Tat but the submersible was worth seeing. Catherine loved trying on the life vests and Henry had to be dragged away from pushing the button to see how the Titanic’s water tight compartments were flooded as she started to go down.

But what has the Titanic got to do with invertrabrates you ask? Well we learnt that Mollusks have consumed much of Titanic’s wood—leaving the metal hull to be munched by microscopic bacteria and fungi. The great iron ship is slowly being eaten away… But that’s not all we discovered. 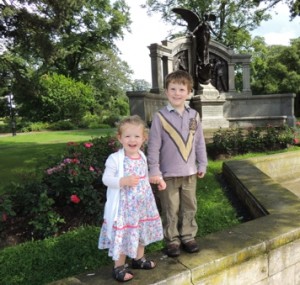 Henry was keen to see the Titanic Engineers’ Memorial while we were in Southampton as pictures of it feature in many of his Titanic books. The Titanic Engineers’ Memorial in East (Andrews) Park, is an impressive memorial bronze statue of Nike, the Greek Winged Goddess of Victory and carvings which represent the engineer officers of the ship who died in the disaster trying in vain to delay the sinking of the ship in order to give passengers time to get to the lifeboats. 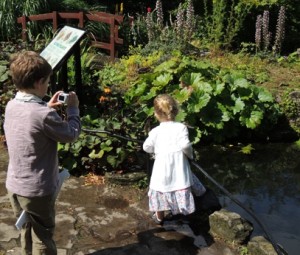 The memorial (there is also a memorial to the musicians in the same park) is located by a space for nature with a meandering water feature, alpine plants and small bridges to cross. Apparently you can spot newts and tadpoles but as the water feature was teaming with carp we did not hold out much hope for native pond life. Instead Catherine delighted in making friends with a young duck and Henry practised his photography skills. 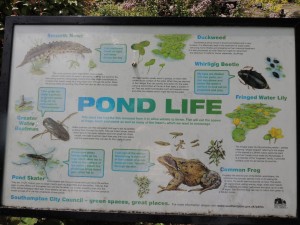 We visited the Southampton Titanic Museum (SeaCity) on a Sunday during the term break with all the college kids away; we had the place to ourselves. We spent about 3 hours there including lunch.

SeaCity Museum is open 7 days a week, 10am – 5pm including Bank Holidays.

East Andrews Park is free and open to the public all year round. You could take a picnic instead of eating in the SeaCity Café (very yummy but a bit pricey – e.g. slice of very good cake £2.50). The main fountain looks like it could be a load of fun for paddling on a hot summer’s day long as you don’t get caught!