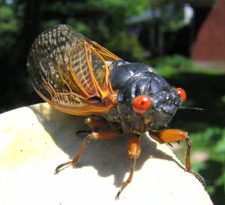 These fascinating creatures have evolved one of the most extreme survival strategies of any insect – and one of the most successful.  Along with their cousins the 13-year Cicadas (Magicicada tredecim and Magicicada neotredecim) and 13- and 17-year species of Cassini and Decula, they spend most of their allotted number of years underground, feeding on the roots of deciduous trees.  So far, so humdrum.  But in the final year of their life, the mature adults emerge, all at the same time, and in truly colossal numbers.  Trees, roads and buildings are absolutely covered in cicadas who spend the next 4-6 weeks or so moulting (one last time), singing, mating, laying eggs and (eventually) dying.

Not only are they everywhere, their noise is deafening!  A chorus of males can sing at 100 dB – that’s as loud as the kind of drill they use at roadwork. Catherine says: Noisy.  Too loud!

What could account for this strange lifestyle?  One early hypothesis was “predator satiation”.  Henry says: that means that even though cicadas make an easy meal for predators like birds and mammals, there are just so many of them that most of them will survive no matter how many get eaten.  Indeed, at something like 1.5 million cicadas/acre, you’d need an awful lot of very hungry critters to make anything like a dent in a “brood” (that’s the collective term for a population of these insects).

The importance of 13 and 17 in this whole affair was thought to be a further adaptation to avoiding predators.  13 and 17 are both prime numbers (Henry says: that means you can’t make 13 or 17 by multiplying anything else together – only 13 x 1 or 17 x 1) and are relatively big in terms of animal years, so the chances of any predator species “synchronizing” their own lifestyles to take advantage of Magicicada years would be minimised.

There are abut 20 “broods” of periodical cicadas in North America, made up of 7 different species.  They each seem to take their turn, and most years see only one brood hatching out anywhere across the continent: Brood 2 (the “East Coast Brood”) is having its year in north-eastern USA in 2013.  Occasionally you get a double hit – but never in the same area: 2014 will see Brood 3 emerge in Iowa on its 17-year cycle, while Brood 22 reach the end of their 13 years further south around Baton Rouge.

Periodic cicadas suck sap from plants and do not bite or sting. They are not venomous, and do not spread disease. They pose little threat to mature vegetation and provide a useful source of food for humans (Native Americans used to roast them), animals (moles love the grubs when they’re still in their underground phase, turkeys gobble up the adults once they’ve hatched) and plants (the dead bodies compost and release all those nutrients back into the soil).

It all seems like a lot of trouble to go to for such a short time above ground but the emergence of a brood is truly one of nature’s greatest spectacles.  What a crazy lifestyle, but what a way to go!