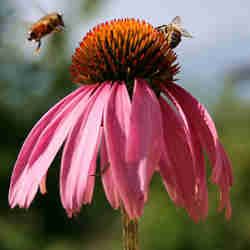 An arcane rule of EU bureaucracy may have come to the rescue of the common European honeybee apis mellifera.  The 27 member states of the European Union have been unable to agree whether neonicotinoid pesticides should be banned.  After 2 inconclusive votes, the decision now passes (under EU administrative rules) to the European Commission which has decided to impose a 2 year moratorium on the use of “neonics”.  Not an outright ban, but perhaps time enough for further important research into the effect of these pesticides on bees and other pollinating insects. (By this point in the proceedings, Henry and Catherine were both yawning but they brightened up when they heard that the bees had won!)

There is worldwide concern about the widespread collapse of bee populations but little consensus as to what is causing this or even whether calling it “colony collapse disorder” is a useful thing to do.  Some research suggests it is all caused by increased use of chemicals in farming, others point to adverse and extreme weather conditions or even the advance of the parasitic varroa mite varroa destructor.  Perhaps it’s a combination of all these, and more.  But can we afford to wait to find out?  Time may be running out for bees and for us – a world without bees would suffer catastrophic food shortages as crops go unpollinated.

Conflicting opinions have lined up on either side of the debate – the agricultural chemical industry, farmers and environmentalists have all rehearsed their arguments, deployed their PR machines and lobbied politicians.

While pesticides are a useful tool in the farmer’s arsenal against unwanted crop destruction, many people are worried that the extensive use and lethal effect of this new class of nicotine-like chemicals poses an unconscionable risk (Henry says: that means you shouldn’t even think about doing it) to the world’s beneficial insects, as well as to their less welcome cousins.  Neonics are more specifically targeted at insects than other pesticides, and they act on insect nervous systems while posing less of a direct threat to mammals etc. They are also water soluble and so end up being absorbed by plants, which are therefore turned into miniature, systemic poison factories.

Some countries have already restricted neonics: France, Germany, Italy and Slovenia, but other countries were apparently holding out for more evidence.  However, this is a perfect example of how the “precautionary principle” should be applied in practice: crops have been grown without neonics for thousands of years, so it’s unlikely that a two year time-out will affect food production as adversely as some organisations have suggested.  On the other hand, it may just give bees the break they need – and, as the Guardian mentioned today, the fate of bees is rather more important than the quarterly profits of a handful of corporations.

Winston Churchill was a noted supporter of bees during WW2 and (as he might have said through a beekeeper’s mask) while this is not the end of the matter, nor even the beginning of the end, it does at least look like the end of the beginning.  And so far, it looks like a good beginning for the bees.